She always signs her posts, love, Laurie. She was already a frequent participant in the discussions on the moretprs list serve when I began following it in 2006. She helped me understand how TPRS fit into a classroom, but she also helped me understand that the most important thing in the room was not the method, not the teacher, not the equipment, but the students. Unless the teacher was focused on them and their needs, there would be no miracle. Unless there was love and respect in the classroom, there would be no miracle. Perhaps love and respect were the miracle.

There are a lot of strong personalities on the moretprs list and strong personalities have strong convictions. Sometimes sparks fly and tempers heat up. Invariably, when that happens Laurie will post something that is both kind and open-minded. She has a special gift for seeing both sides, for knowing where people are coming from and understanding their pain. Again and again I admired her gentle wisdom and her skill at reconciliation and wished I could be more like her.

She has contributed to the TPRS movement in many ways. As a coach at NTPRS and IFLTC she has helped countless teachers gain confidence in their skills. After a comment she made on Ben Slavic’s blog, the author of TPRS Q&A, called her a TPRS goddess. https://tprsquestionsandanswers.wordpress.com/2015/01/23/what-does-t-p-r-s-goddess-laurie-clarq-say-about-circling/ With Michelle Whaley she helped make Embedded Reading and Movie Talk indispensable tools in the TPRS toolkit. On her blog, Hearts for Teaching at http://blog.heartsforteaching.com/ she has generously shared hard-earned insights gleaned from her long experience in the classroom. Reading her posts, I particularly appreciate her honesty. She doesn’t pretend to be a super hero teacher. She’s open about her doubts and struggles. 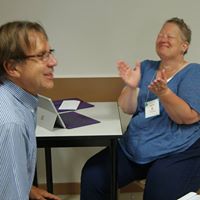 Currently, having retired from the school in New York where she taught many years, where she was well-known and respected by her students, she has accepted a new job in a new school in California. It takes years for a teacher to build up a reputation as “a good teacher” so that students enter her classroom knowing they are in the hands of someone who’s competent, someone that their friends and older brothers and sisters respected. New teachers have to start from scratch and prove themselves every single day. That is the challenge that Laurie has courageously accepted. On her blog she is disarmingly frank about her trials and setbacks, her little steps forward and minor victories.

I was delighted when Laurie told me that she was coming to Agen in 2016. I had met her face to face in 2014, but in all the rush and excitement of the big conferences, we didn’t manage to really get to know each other. Thank heavens, she came to Agen a day early, so I had some time to spend with her and immediately it felt like I was talking to an old high school friend, someone who knew me from way back when. We were on the same wave length on so many things that we were often finishing each other’s sentences. She was a great presenter and a precious addition to our coaching team. I hope she’ll be able to come to Agen again and again.
Love, Judy